Today would have been my grandmother’s 100. birthday. The mum of my dad was an amazingly strong woman, who would always kick my butt when I felt sorry for myself ☺ She told me her biggest dream was always to become a singer, but she didn’t have that chance in her lifetime. I had that dream too, but I didn’t have the courage until much later, long after her death, to pursue that secret passion of mine. Since her death I have been wearing the ring she was wearing on her finger until she died. I have been thinking of her daily! And I get reminded how lucky I am living my dreams and living in peace, and how grateful I am to my strong grandparents, who lived through two world wars and hunger, and my parents, for their strength to survive and the future they created for us to live into! 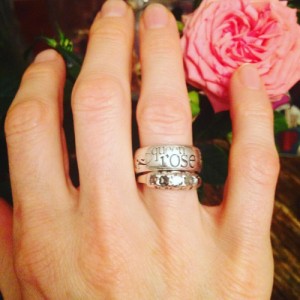 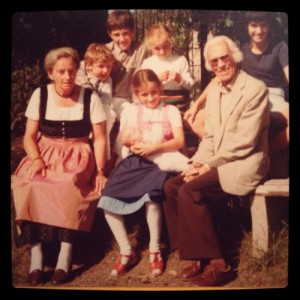 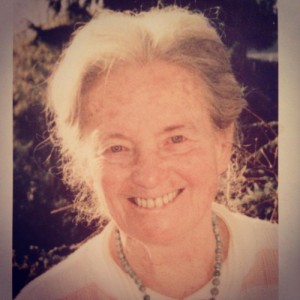 In honor of her birthday I read through the interview I took with her for my high school graduation (I specialized in history). I interviewed my grandmother about the last few months in World War II and the time after the war ended, how she fled with 3 little kids from “Sudetenland” (parts of Czechoslovakia, which were inhabited primarily by Germans until the end of the war, when they all got expelled) loosing and leaving everything behind. She caught the last train before the train station of Prague was bombed and miraculously survived the journey with her 3 little kids (my dad was 2 ½, my uncles 4 & 5). It was family history her children never heard about until I shared that work with them after she died. My grandparents’ generation did not talk about the two world wars they lived through.

My brother gave my parents a book for their golden wedding anniversary this year called “Lost generation”, which speaks about my parents generation born in World War II, their traumatic experiences and how they never got to talk about it or work through it. It has been researched that many of my generation’s depressions trace back to our parents’ and our own upbringing as a result of unresolved traumata they lived through.

Only very recently one of my uncle wrote my interview with my grandmother on the computer and distributed it again. My dad, who was touched by the book he read and that interview, suggested for them to revisit their birth home and travel the route my grandma took to flee from the Russians and to find “safety” in bombed and destroyed Austria, where her parents lived. My grandma described in detail what she and her husband, who was stationed as a medical doctor in Prague, went through. It is unimaginable to say the least. Their courage, intelligence and strength helped them to survive after they had cried for a night and had decided to stay together in Prague to die as a family. But God had a different plan ☺ I couldn’t hold back my tears reading that document and the details, including how she saw a succession of Jews, who had to walk from Hungary to the concentration camp in Mauthausen. I got to visit that concentration camp with school as a teenager and could not stay there long, I got sick to my stomach immediately. One of the Jews gave her a letter she mailed, and she gave him her ration of cheese of that day getting threatened by the guard he would shoot her…

I can’t believe that so many years later this is such a relevant document: there are millions of people fleeing from war and looking to find a better life somewhere else.
My dad wrote about it so eloquently in his recent advent letter: “I view the politics provoked by refugee movements, as well as the politics, who cause these refugee movements and the increasing polarization of society as alarming. Some things said by right wing parties in Europe terrifyingly remind me of times I thought were historic. We now have to pay the price for what the Western world did and continues to do to the nations of Africa and Asia since colonization started until today’s neoliberalism with its unfair trade agreements and hidden horrendous weapon exports. What interests and powers are behind the martial battle call against terrorism – history taught us that terrorism can’t be defeated with bombs, but instead fuels it – with all of the endless suffering of the civilian population in the bombed areas, which increases the refugee movement?”

As I get reminded of my grandmothers strength and the fight she fought to simply survive, I get reminded that I have to fight the fight for a better world for everyone. The good thing about the modern world is that we are all connected with a button on our computer. We can share and encourage each other to not give up the fight for justice and peace around the world.
I pray that this holiday season brings some light and peace to everyone, no matter what each of us goes through, and that we may find the courage to bring that peace to someone else close to us.

Concerts in Switzerland, visit to Austria and a big Thank You to my parents!
Do I sound like Edith Piaf? It is hard not to rush…